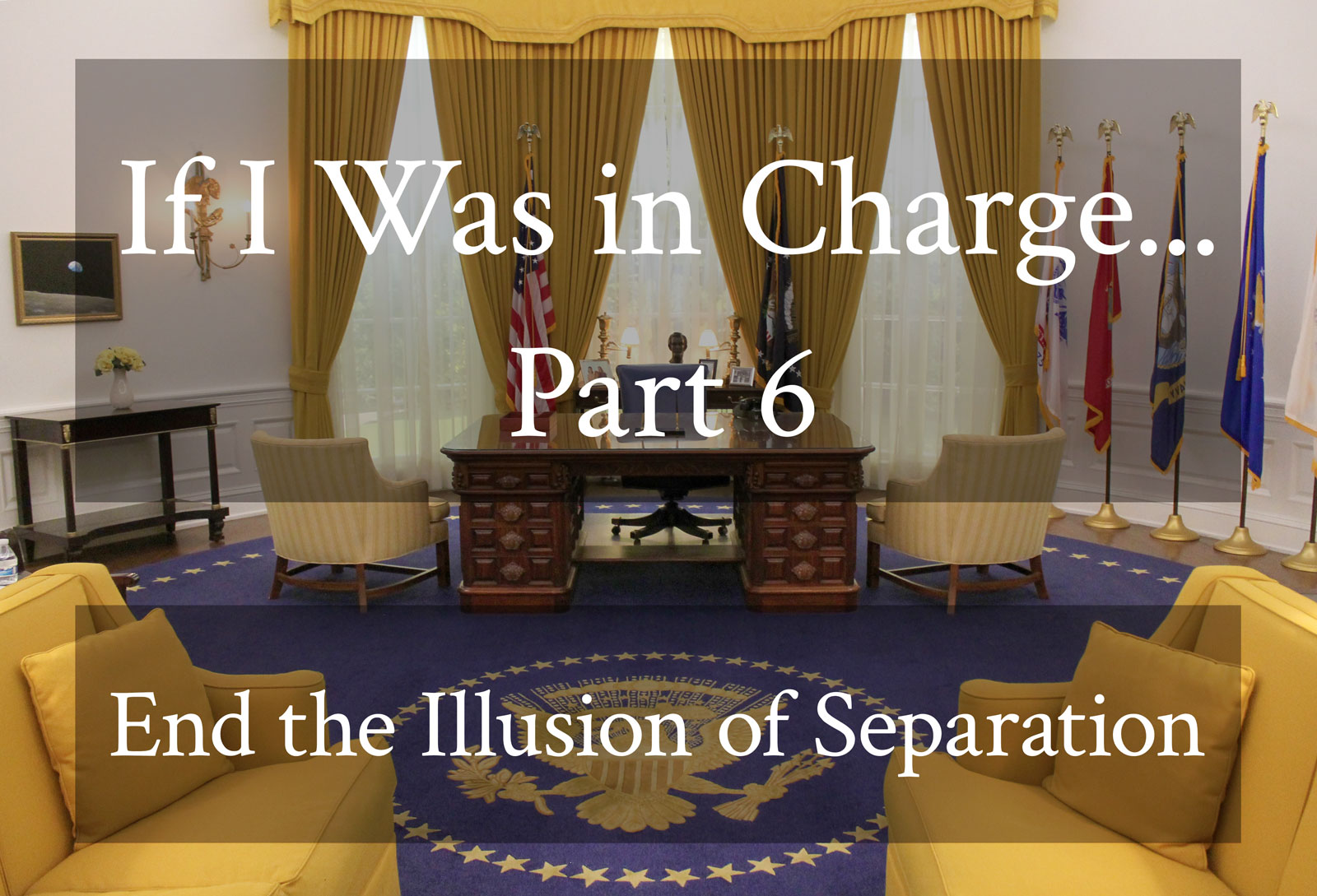 End the Illusion of Separation

An example of the consequences of ending the illusion of separation include acknowledging responsibility for polluting shared resources, such as groundwater, seas, and atmosphere. Another example would be the cessation of all invasive police, military, and paramilitary engagements. A third example would be providing needed surplus resources to those in need of those resources. A fourth example would be consistently choosing cooperation over conflict, while acknowledging mutual sovereignty and the existence of any disagreements.

While you can attempt to separate things in your own mind, in reality everything is interconnected. What happens in one place effects what happens in another place. What happens to one person effects what happens to other people. The more we ignore how interconnected reality really is, the more we’re faced with the harmful consequences of our ignorance. Because we are all interconnected, any differentiation between “us” and “them” is merely an arbitrary mental construct. Who is deciding who gets to be included as part of “us” or as part of “them”? In reality, “they” are merely a subset of the real “us”, a subset created within our own minds for the sake of our own personal convenience.

“Us” versus “them” conflicts only make sense to someone caught in the illusion of separation. Pitting Left against Right or Right against Left ignores that they are both hands of the same individual. When fighting ourself, we always lose. Rather than being in conflict, all of us need to cooperate in order to create wellness instead of illness. Differences between the various parts of us do not indicate superiority or inferiority, no matter how much we may choose to identify or avoid identifying with them. Ignoring “their” needs in order to satisfy “our” wants is not only delusional and dysfunctional, it is also the very definition of greed.

There are times when illusions need to be disrupted in order to allow healing to begin. When someone is attacking themselves, it does not maximize overall wellness to ignore them or dismiss them as insane. Rather, it is far healthier to redirect their attention. To end the illusion of separation, redirecting people’s attention away from illusion and towards reality is essential. This can be done rather straightforwardly through the use of public awareness campaigns. While it is not possible to determine and provide within this article an exhaustive list of effective messages for use in redirecting people’s attention, the following messages are meant to serve as suitable examples:

For governments to no longer be allowed to deny that everything is interconnected, either implicitly or explicitly, laws must be established making such behavior illegal. The basis of these laws is that any law, regulation, executive decision, act of enforcement, or other governmental action facilitating the illusion of separation must be immediately annulled upon confirmation of the occurrence of such facilitation by a court of law having the appropriate jurisdiction. Furthermore, any party shown to have engaged in such facilitation, as determined by the court, must be immediately removed from governmental service. These conditions would then bring about the end of the governmental utilization of the illusion of separation through the potential and actual filing of lawsuits. By making use of existing judicial systems, rather than adding a new mechanism to ensure oversight, this approach minimizes the complexity and time required for the implementation of this directive.