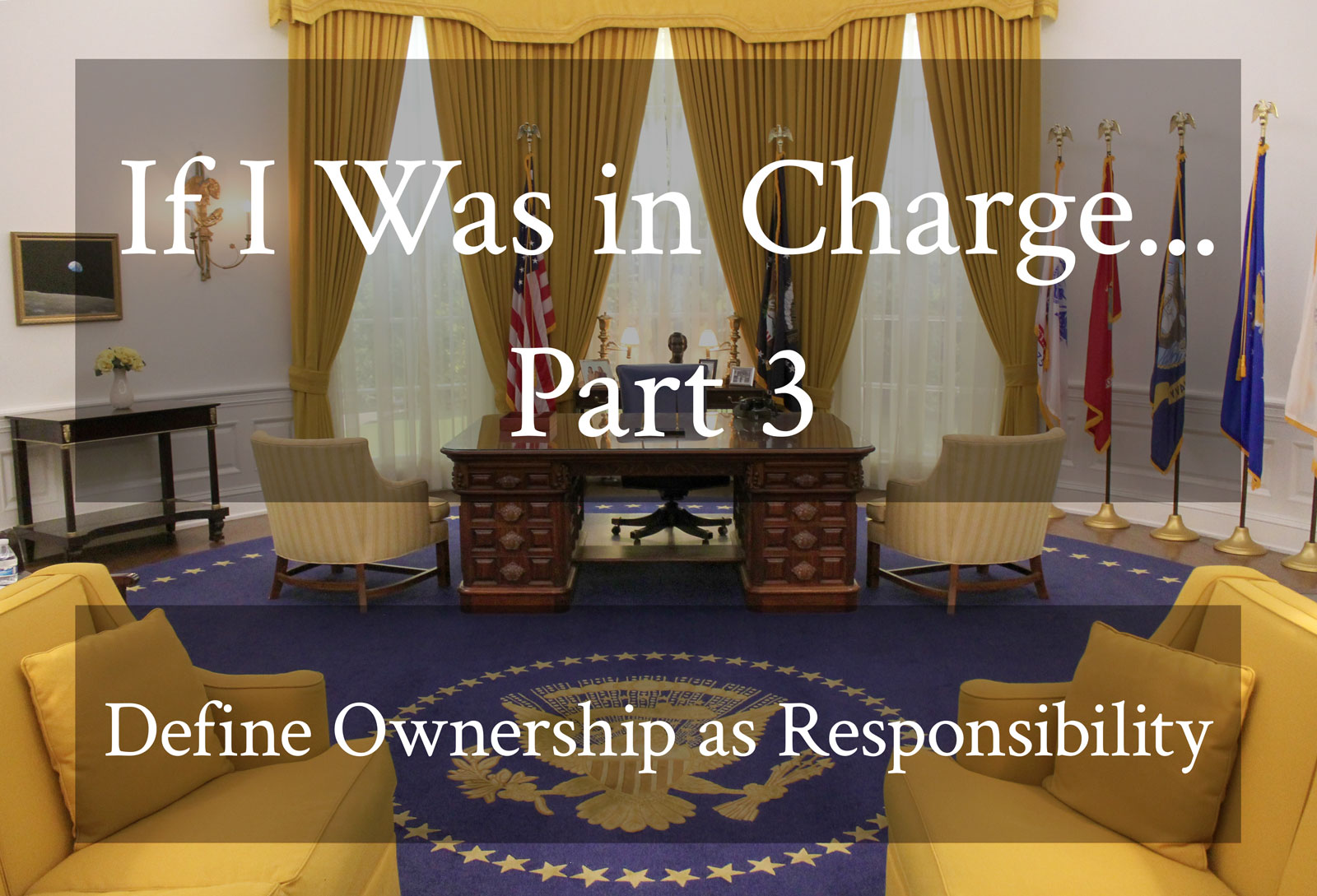 The third directive I would issue, if I was in charge, is to define ownership as responsibility. What this means is that ownership, which is generally understood to be the possession of something, inherently creates responsibility for what is being owned. This is because one’s possession of something indicates one’s ability to utilize it — and the ability to utilize something creates accountability for its utilization.

For example, if you own a car, your ownership of the car indicates that you use it and therefore are responsible for its use, including how it is used, when it is used, where it is used, and by whom. Your ownership of a vehicle means that you are responsible for maintaining the vehicle and for mitigating any harm arising from its use. This is why car insurance is legally required in most places, so as to ensure that car owners are able to afford the costs resulting from their responsibilities in the event of an accident.

Because the prime directive of this series is to maximize overall wellness, it is essential for things to be used well, so as to facilitate wellness. To provide an extreme example, if one person owns all the food in a family, how the owner facilitates the use of the food has a significant influence on the wellness of the family. If the food is not effectively distributed to those who need it in a timely manner, and instead is needlessly withheld, wasted, or used to extort, the food is being misused and the owner of the food is responsible for the illness that results from its misuse.

This topic inevitably leads to questioning the basis of ownership and the basis of responsibility. So, answering these questions is essential. Technically speaking, no one owns anything outside of themselves. The ownership of everything else that we believe we own is merely evidence of the claims that we and others choose or choose not to agree to. To observe that this is true, consider the things you owned when you were born.

As a newborn babe, you owned nothing aside from your own body. This is why you were not considered responsible for anything outside of your own body when you were born. At most, you were responsible for breathing and burping, eating and defecating, waking and sleeping,… Essentially you were responsible for nothing more than learning to inhabit your body, because your body is all that you owned. As you grew, you were assigned or claimed ownership over certain things, such as perhaps your binky, blanky, bib, and bonnet. Over time you observed that others were also assigned or claimed ownership over things, including things that you desired ownership over. Those things are what you later came to know as property.

Much of humanity’s conflicts and much of its governance have been due to the assigning and claiming of ownership over property.

Since ownership is based on beliefs, defining ownership as responsibility involves aligning people’s beliefs, such that they acknowledge responsibility for the use of their property. Fundamentally, this must be done both publicly and legally in that the public must be informed of the nature and expectations of ownership while all parties are held legally accountable for their property ownership. I believe this can be done in three steps:

Despite the simplicity of defining ownership as responsibility, the consequences of applying this understanding are likely to be quite complex. Self-interested but irresponsible parties are likely to promptly sell their properties to those willing to be more responsible. As a result, the benefits of ownership will quickly be conferred only on those willing to bear the burdens of ownership. Liability will become less of a legal blame game and more of a verification of ownership. Additionally, owners shown to be behaving irresponsibly with their property will forfeit ownership of such property without financial compensation, resulting in a change of ownership for a wide variety of properties overly a fairly short duration of time. The net result of the change, however, will be the incentivization of increasingly responsible behaviors that enable the maximization of overall wellness.